Pope Francis and the Mediation of the Peace Accord in Colombia

Pope Francis and the Mediation of the Peace Accord in Colombia

It has not been unusual for popes to become involved in helping international partners to negotiate peace accords, and in the case of South American nations John Paul II had been central in the avoidance of a war between Chile and Argentina in the late 1970s with the signing of a peace treaty between Chile and Argentina.[1] Behind such requests or offers for mediation lied the moral authority given to the popes by a majority Roman Catholic population in Latin America, and the advancement of a papal international presence advocated by John Paul II through his many visits over a long papacy.[2] In the case of the Colombian peace accord, Pope Francis was not directly involved in the public negotiations but at the time when discussions had been difficult between the FARC and the Colombian government his own encouragement created the conditions for a final agreement. Thus, according to the Italian historian Gianni La Bella, of the Saint Egidio Community in Rome, the Fuerzas Armadas Revolucionarias de Colombia (FARC) and the Colombian government recognized the authority of Pope Francis and committed themselves not to let the conversations collapse.[3]

The history of warfare in Colombia had been a long one. Such armed conflict was the longest in the world and began in 1964 with the formation of two guerrilla groups: the FARC and the ELN (Ejército de Liberación Nacional).[4] However, political violence in Colombia had taken place since the 19th century, particularly after the assassination of the Liberal Party presidential candidate, Jorge Gaitan in 1948, starting a decade of 200,000 killings, mainly of peasant farmers, known as la Violencia. After that period peasants started organizing themselves advocating a reaction towards social injustice and the great economic inequality within that South American nation. Thus, the elites requested the government to end the existence of these groups in the south of the country, groups that established what became known as ‘independent republics’. In 1964, the Colombian Army marched into the zone known as Marquetalia to find themselves fighting a guerrilla army rather than groups of peasants. In 1966 such guerrilla army became the FARC. At the same time, the ELN formed by university students who had returned from Cuba and who associated themselves with the Communist Party of Colombia was formed in 1964. The ELN boosted among their fighters the Catholic priest Camilo Torres, previously university chaplain who joined them and died in combat in San Vicente de Churcurí (15 February 1966). By the 1980s paramilitary organisations associated to landowners and drug cartels were formed with the support of the Colombian state, a variety of organisations with a membership of 8,000 paramilitary that united themselves in 1997 under the Self-Defence Forces of Colombia (AUC). Over the years, thousands of Colombians died, were kidnapped, and experienced insecurity. Thus, the peace accord supported by Pope Francis was welcomed by all parties and the FARC and the ELN became political parties in 2017.

The final agreement between those involved in the peace negotiations took place in 2015 with the help of Pope Francis. During his apostolic visit to Cuba (19-28 September 2015) and as an addendum to his formal homily during the Mass at the Plaza de la Revolución, Pope Francis addressed the Colombian government and the FARC and told them ‘we don’t have the right to allow another failure’.[5] In his formal homily Pope Francis reiterated his sense that service becomes the central motto for any relations within Cuba and indeed other states so that ‘the importance of a people, a nation, and the importance of individuals, which is always based on how they seek to serve their vulnerable brothers and sisters’.[6] In May and August 2015 Professor La Bella carried personally two letters from the FARC to Pope Francis, with the agreement of the Colombian government, requesting his involvement in the process, as they wanted peace. As a result, the Pope agreed to get publicly involved but there at the end there was no need for Pope Francis’ direct involvement as the President of Colombia Juan Manuel Santos and the leader of the FARC, Timoleón Jiménez (aka Timochenko), agreed to sign a peace accord within a period of six months from the Pope’s call for peace.

Pope Francis visited Colombia in 2017 and met with victims and perpetrators of the armed conflict.

(From Mario I Aguilar, Pope Francis: Journeys of a Peacemaker. London and New York: Routledge, 2021) 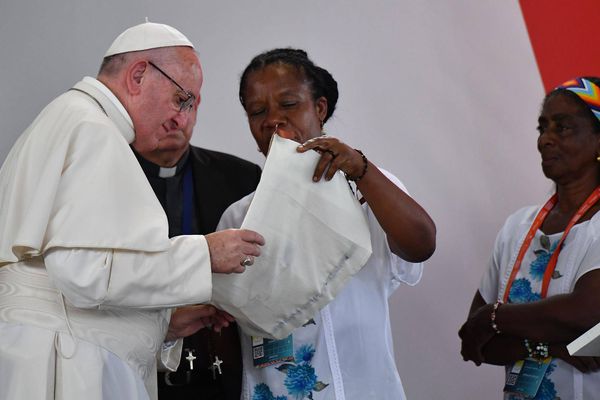 Professor of Religion and Politics